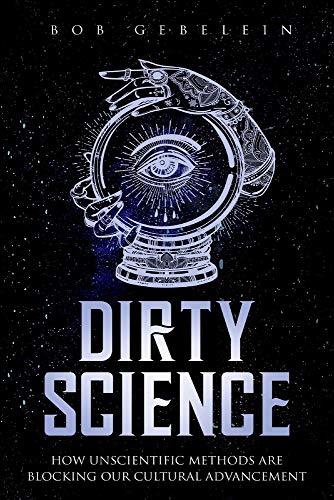 Bob Gebelein graduated from Harvard with a BA in Mathematics in 1956, and then went on to have a legendary career as a computer programmer and creator of software systems.

His book, RE-EDUCATING MYSELF, describes his search and the answers that he found. THE MENTAL ENVIRONMENT describes the network of lies from which he extricated himself. His original songs, on “Uncle Bobby’s Record,” now have an international following.

Because he is writing from a new civilization, he can view the scientific establishment with some perspective, especially because he is not controlled by it. Also he brings to DIRTY SCIENCE original concepts such as “the mental senses,” “mental warfare,” and “psychological age,” which make this work a step ahead of the present culture. Hi Bob, thank you for joining us today at Reader Views. Tell us about your latest book, Dirty Science.

Establishment scientists are trying to tell us that there is no reality beyond the physical. They have not proved this scientifically, so they force it upon the academic community with unscientific methods such as ridicule, power politics, argument-from-credentials, and refusal to look at the evidence. This is blocking our culture from knowledge of the psychic, the spiritual, and even the mental.

What inspired you to write Dirty Science?

I have been working since 2009 as a volunteer at The Rhine Research Center in the field of parapsychology. I have learned that academic people who show an interest in the psychic or the spiritual are not just ridiculed, but they are denied publication, funding, and employment. Tenured professors are shunned.

The National Academy of Sciences in 1988 issued a report that declared, "The committee finds no scientific justification from research conducted over a period of 130 years for the existence of parapsychological phenomena." They didn't even look at the evidence. There is literally a "ton" of evidence of the psychic and the spiritual here at The Rhine Research Center. Their assertion will be recorded in the annals of folly forever, but meanwhile it has caused parapsychology to be branded as a "pseudoscience" in America.

At the same time, I realized that the prejudices of academic people against Freud, Jung, psychotherapy as education, dream analysis as education, Edgar Cayce, Richard Kieninger, and the spiritual were keeping them from recognizing my own work toward a new civilization. The realization that my own work was being shunned because of academic prejudices was the real emotional trigger that inspired me to write Dirty Science.

What exactly does dirty science mean?

"Dirty science" means the use of unscientific methods in the name of science by persons with scientific credentials representing prestigious institutions such as Princeton, Harvard, and the National Academy of Sciences.

What are the ramifications of dirty science?

We are in a political situation here which is very much like the Dark Ages, except that the Inquisition is invisible and represents an unknown power. Knowledge is being suppressed. Academic people are being held to a narrow belief system, which in this case includes only the physical. Our technological ability to destroy ourselves can lead to our extinction as a species if not modified by psychological growth and spiritual awareness.

In your opinion, how did “establishment scientists” rise to such a position of authority to be able to discount or squash another’s research entirely?

I can't answer this question. Physical scientists venture unscientific opinions on subjects like parapsychology which are outside their fields of expertise, and these opinions are accepted universally as absolute truth within the academic community. I can only explain it as some kind of mass hypnosis.

Are there certain areas of research that are more affected than others?

Anything that is not purely physical is affected. Psychology has been steered away from the study of the mind to the study of physical behavior and the physical brain. People who study precognition, telepathy, clairvoyance, remote viewing, psychokinesis, energy medicine, spirit entities, reincarnation, intelligent design, or levitation are considered mentally incompetent and shunned, even though there is evidence for all these things. The argument, starting with the assertion that all these things are impossible, is that the evidence must be faulty.

Why the bias against these areas?

Establishment scientists made a gross error 150 years ago. They made Darwin's theory of unintelligent design the basis for a religion, a belief in a purely physical reality, before it was proved. Biologists have actually disproved it, showing that new species have appeared more quickly in geological time than could be explained by the slow process of adaptation, but they can't admit it, because their whole belief system rests upon it. And I don't think they can ever prove that what Darwin called "random mutation" wasn't caused by Divine intervention.

Unquestioning absolute belief in a purely physical reality has become a requirement for membership in the social group "science."

Why do American colleges and universities go along with this?

In 2013, I wrote to the presidents and chancellors of the 137 top-ranked colleges and universities in the United States, asking them to do something to end the domination of physicalism. I received a good response, 39 replies in all. One of them agreed with me. Two of them disagreed. But generally they seemed to be unaware that there were extreme social forces silencing debate and destroying academic freedom. They were reflecting the same innocence that I had during my college days.

Can you give us examples of theories and evidence that has been rejected or hidden due to dirty science? Billions of people worldwide have had experiences similar to mine. Recent studies done in Germany, Iceland, and Switzerland show that between 50% and 91% of people have had some kind of psychic experience. These are not just "theories." These are first-hand evidence.

What can be done to change the status quo?

I am appealing to the intelligent reading public, first of all to learn the difference between what is science and what is not, and then to put pressure on those people who use unscientific methods to clean up their act. I offer 3 simple rules to determine whether an opinion is scientific or not:

1. Does the person use obvious unscientific arguments, such as smear tactics?

2. Is this opinion in this person's area of expertise?

3. Is this opinion backed by replicated scientific studies?

I am hoping to reach everybody who has ever been to college, is in college, or is planning to go to college. I am hoping they will confront their college, asking them whether they study psychic or spiritual phenomena, and if not, why not, and offering donations to support such studies. Briefly, I am trying to create a revolution.

How long have you been working on Dirty Science?

I first had the idea in 2012, but I haven't spent all that time writing the book. I wrote the letter to the presidents in 2013. This became a Guest Editorial in the Journal of Parapsychology and then a short talk at the Annual Conference of the Parapsychological Association in 2014. I actually sat down to write the book in the fall of 2014, thinking I could do it in one winter. But I had to revise Chapter 1 five times before I was satisfied with it. This was a growth process which took 2 more years. The book was finished in the spring of 2017, but I took another year and a half trying to get a literary agent or publisher.

Tell us about some of the research you encountered while collecting data for your book?  Did you have trouble finding documentation in any of the areas you wanted to focus on?

I am not really a researcher. I am a philosopher and a creative thinker. The evidence for dirty science is so blatant and obvious that it takes no expertise to be aware of it.

Who is the intended audience of Dirty Science?

As I have already said, I am writing for the intelligent reading public, and particularly those who are able to think for themselves and question "authority" (so-called). I write with a high-school-level vocabulary, so this book should not scare away anybody over the age of 14 (although some intellectuals are insulted by my simple style).

So, what’s next for you?  Are you planning a follow-up book?

This is always a depressing question. It is as if somebody is dismissing this book and waiting for the next.

Dirty Science can be, and should be, an important book. I want to reach 100 million readers with this book. My work promoting it has barely begun. I have suggested a follow-up book describing people's experiences with dirty science, but so far I have no takers. What I would really like is a follow-up revolution.

How do you intend to reach 100 million readers?

I am affirming that 100 million people need to read this book. I am precipitating that thought into the mental environment. I am saying that this issue involves the way we are all being educated, and our culture at the very highest level, and even our chances for survival. Obviously I can't reach 100 million people all by myself, but if every person who thinks this should be an important book can reach 2 other people who think this should be an important book, it will happen.

Do you have a website where people can learn more about you and your book, Dirty Science?

You can read Chapter 1 on my website, dirtyscience.net. I invite you to share your comments there. If you click on "AUTHOR," that will take you to bobgebelein.com, which describes my other books, my music, and my philosophy.

Bob, thank you for joining us today at Reader Views and sharing the message about Dirty Science.

—Dirty Science is available for sale on dirtyscience.net, amazon.com, and as Print on Demand (POD) at store.bookbaby.com. It is also available as an eBook (Kindle) on amazon.com and will be available soon as an audiobook. Bookstores and distributors can contact Bob Gebelein at dirtyscience2@gmail.com for special discounts.